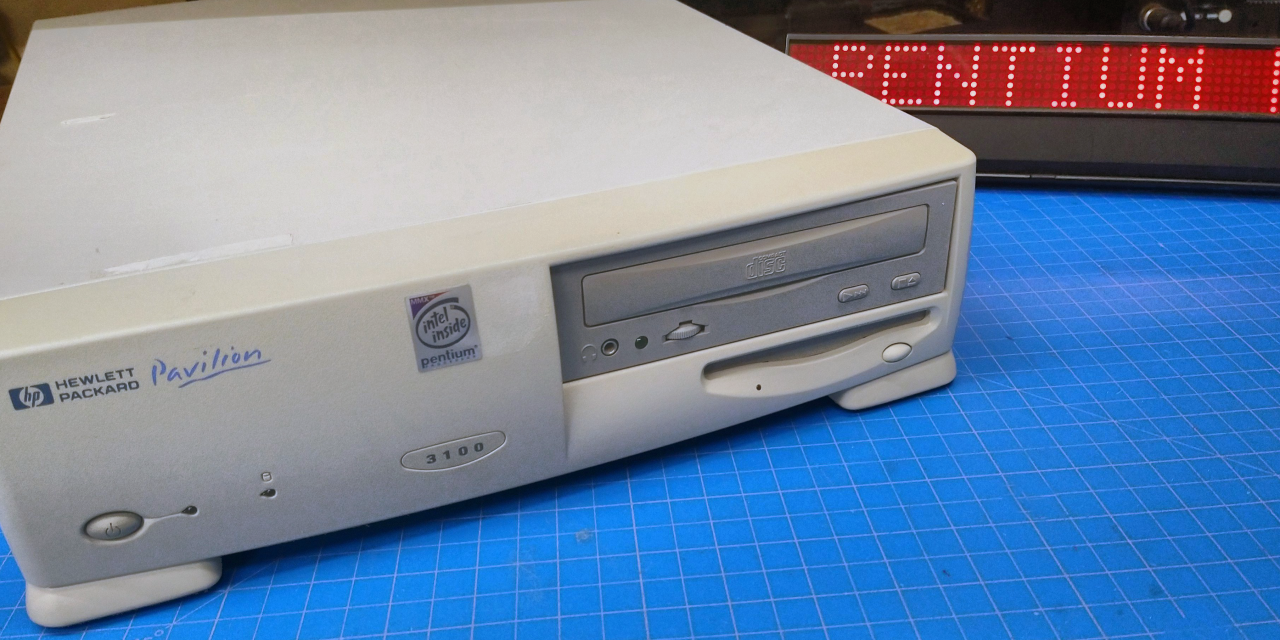 Back around the end of September when I was finished with the 486 DX33 machine that I was rebuilding for the #486BuildOff on Twitter I decided to pull out this HP Pavilion 3100 that I got from a client last winter. It is a Pentium MMX 166mhz machine with 8meg RAM, no hard drive and an 8x CD-ROM drive, it does boot and functions as I tested it when I brought it home and again recently.  On the 486 build I just finished I really enjoyed the ease and speed of the CF Card as a hard drive replacement I used in that machine so I figured I would get one for this MMX machine also.  That would mean the only parts I actually laid out money for on this MMX machine is the 2 gig CF card and CF Reader to IDE adapter.  I will also throw in the Sound Blaster 16 I picked up for that 486 build which I ended up not using on that making it the sound card for this MMX machine, along with an additional 8mb stick of SDRAM to bring the MMX machine to a total of 16mb. 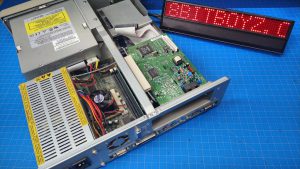 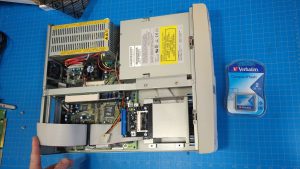 After I installed the CF reader and running a few tests I found the CD-ROM was not reading 100% so in looking through my collection of about 50+ CD/DVD drives I could not find any that were not black.  With that being the case, I took a tested working and reliable Sony DVD/CDRW drive and broke out my collection of spray paints used for retro projects.  After reviewing samples of a few various gray’s, I ended up going with Rust-Oleum “Perfect Gray” for a color that was a near match to the color of the metal case housing on the computer. 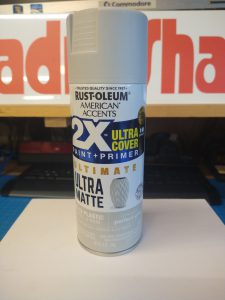 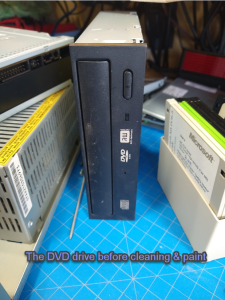 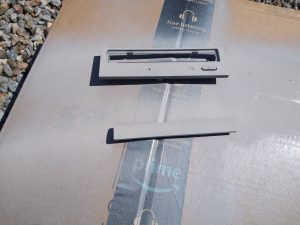 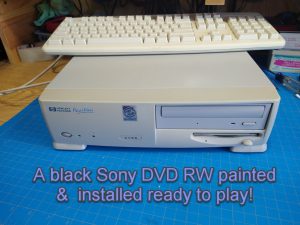 Another issue I found was the floppy drive was a bit finicky in reading disks, I took it apart did a cleaning and lubed the rails but the issue still persisted. Turns out the disks were not always seating in the drive all the way after you inserted them, after removing the left mounting screw on the drive mount to the front bezel all was just fine!

At this point I also swapped out the 2gb CF card with a 4gb card after thinking about the versions of Windows 3.11 and Windows 9x I could put on here along with games!  You can see in the photos below the CF card reader is mounted on the hard drive mount, I drilled two holes that lined up with the screw holes on the CF reader board, I also laid down a strip of electrical tape then covered that tape with a strip of duct tape so the CF reader would not risk any traces or solder joints shorting on the hard drive mount. 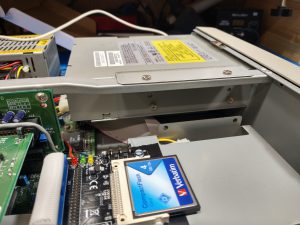 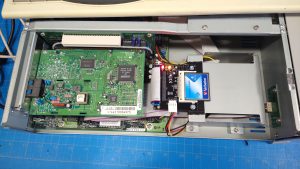 I left the modem that came with the unit in the top ISA slot and installed the Sound Blaster 16 that was left over from my 486 DX33 rebuild in the lower ISA slot.  I will rarely be using the internal modem that came with this PC as most of my BBSing will be done via the serial port using any one of the following; external dial up modem, WiFi RS232 Modem or cabled to a PC with TCPSer running.  Those last two would be used for telnet dialing into BBSes.

The details of setting up the CF drive and DOS will be for another post but for now I can tell you in the end it all came together and even the Sound Blaster 16 that didn’t like the 486 DX33 worked instantly in this MMX build.  Here you can see this Pentium MMX machine is installing and playing Kyrandia for MS DOS! 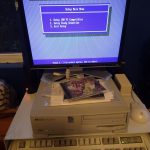 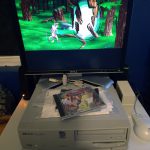 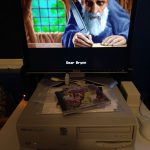 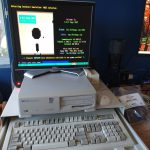 I think now would be a good point to list out the official specs of this machine:

In the future I will try upgrading the CPU from the Pentium 166mhz MMX to maybe one of the Pentium 200mhz CPU’s I have, I would like to use a 233mhz CPU but that will take some playing with the bus and jumpers to see if I can convince the motherboard to do it.  Speaking of that, in searching I could not find a jumper diagram or really much of any information on this PC online, so I made up my own jumper diagram and you can download that here if you happen to have this machine.

Stay tune for more on this machine as I am far from done with it, even thought this was a fairly simple rebuild I am very pleased with the way everything came out and I have been using it to dial in to BBSes including our own BBS.

If you happen to have this machine or just want to chat about this one leave us a comment below.  Also don’t forget to subscribe to our website if you have not already up at the top right, till next time take care! 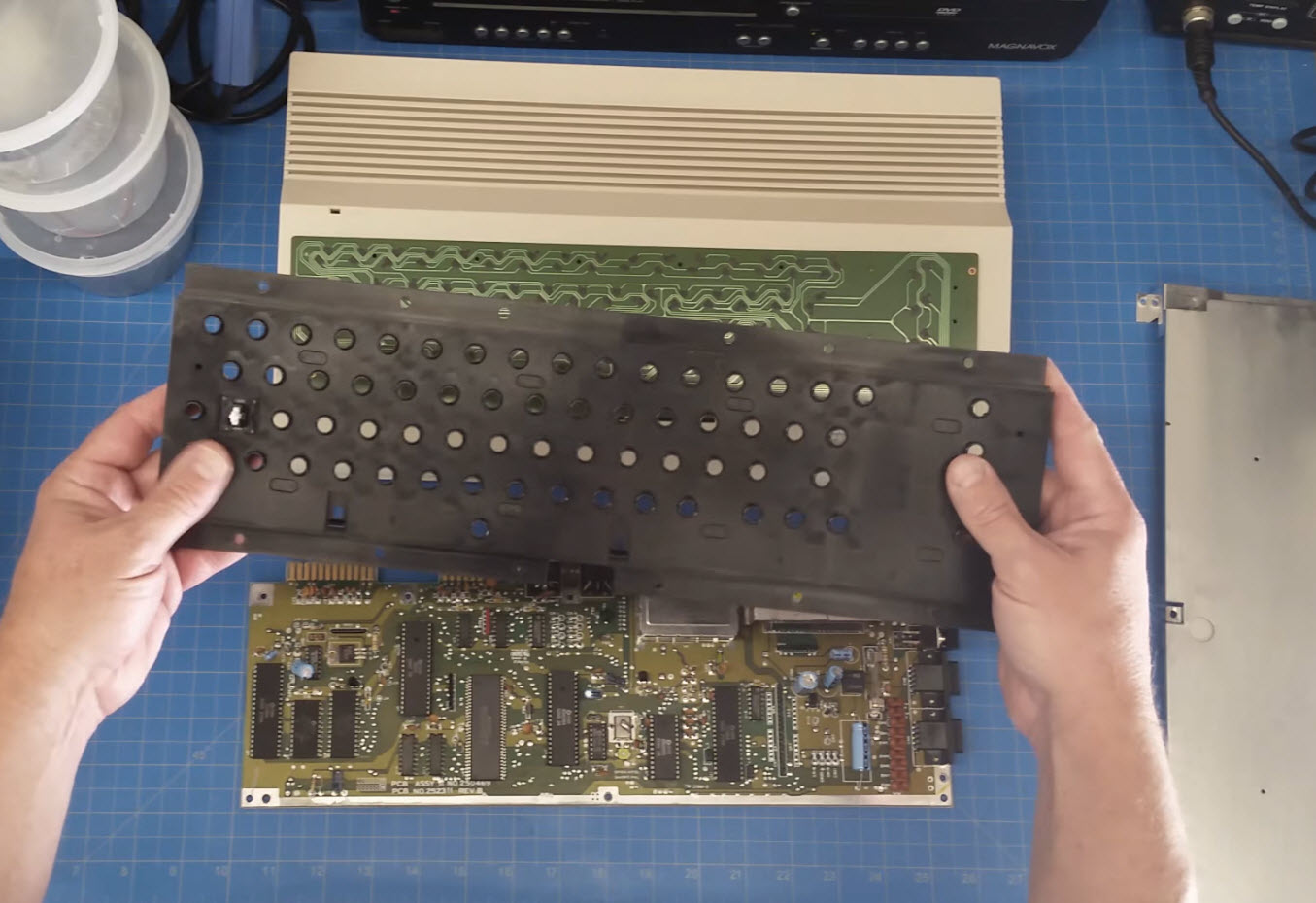 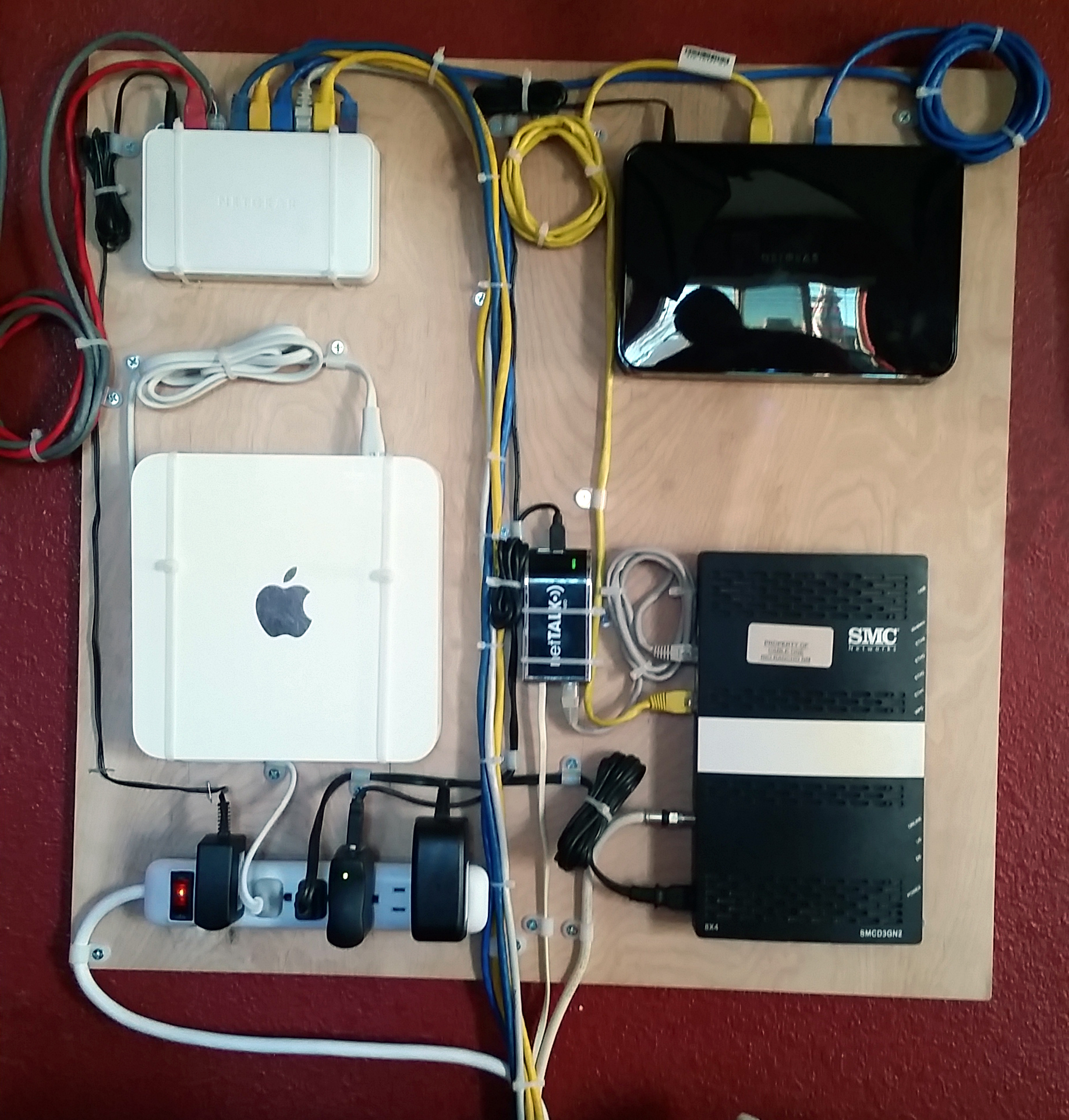 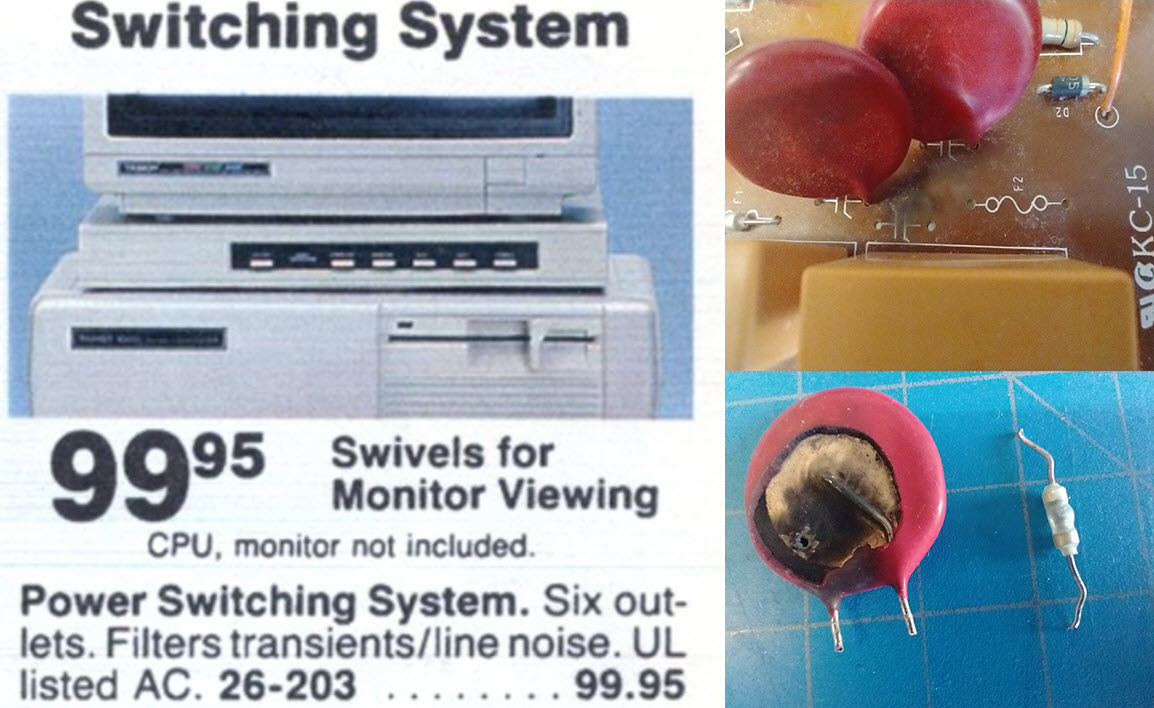 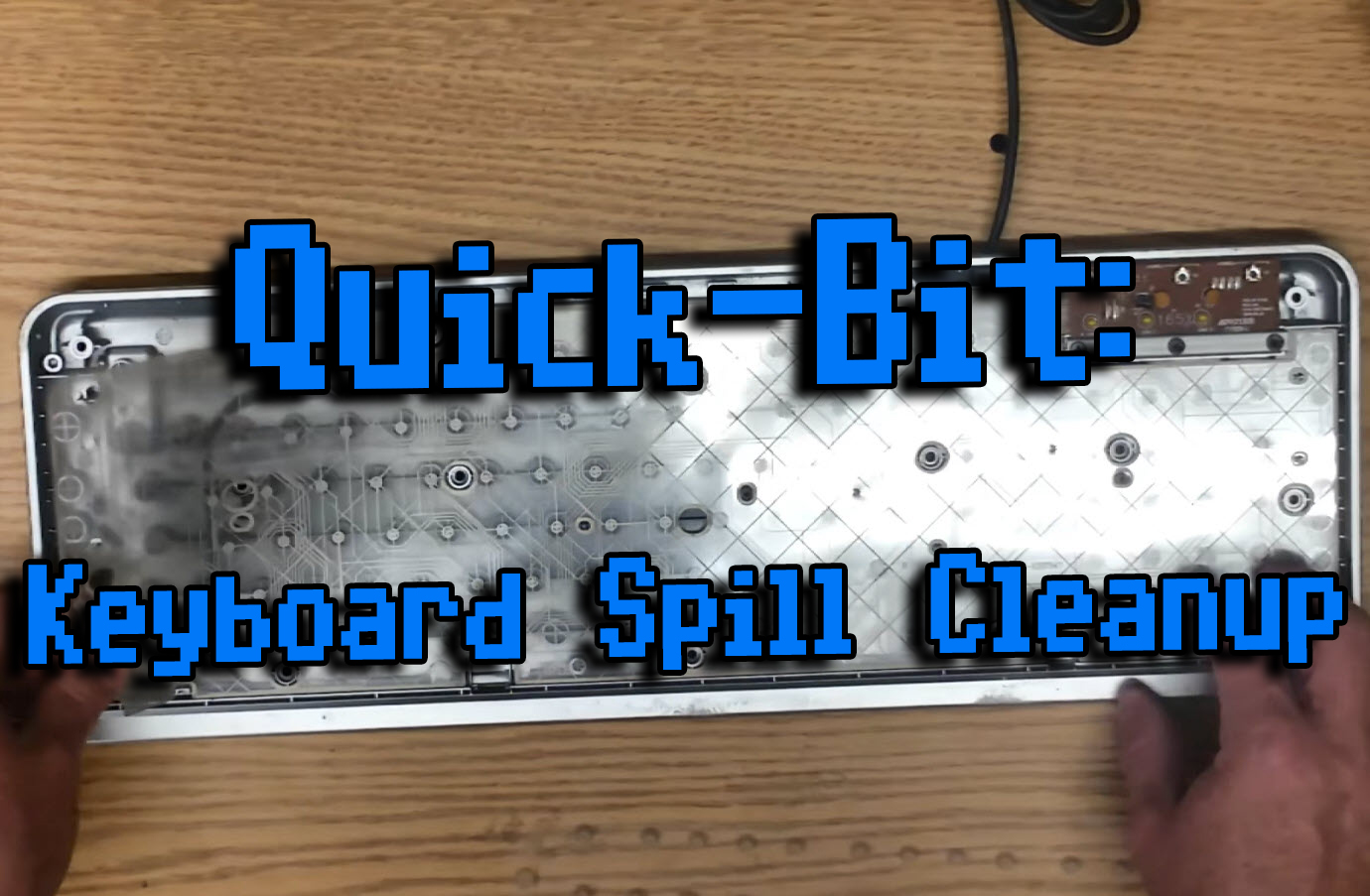 I just bought this same machine on ebay. I was looking into the same thing with the 233mhz CPU. looks like others tried and only got 200mhz out of it. There are some sites with old HP manuals. that might have the answer to what the jumpers need to be set to but I’ll look and try it out once i get the computer and 233mhz cpu

Please share your results and experience here once you get it!! I did document the full jumper set (https://8bitboyz.com/download/hp-pavilion-3100-mb-jumpers/) and even based on those settings seems like you could only get it to top out at 200 mhz. In fact I had a plain Pentium 200 that worked just fine on it, but no 233 to try. I still need to dig through my old cpus as I am sure there is a 233 somewhere to try when ever I get some time for that.

Keep us posted on yours, looking forward to hearing about it!